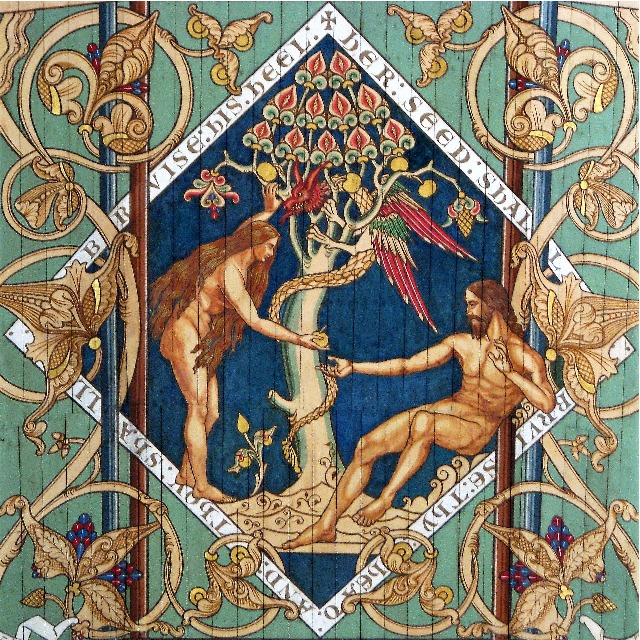 We all know the story there was God, he made the world. After seeing all was good, HE decided to make Adem and Even… in HIS own “image” character. Then HE told them not to eat from the tree of wisdom or they will die. Which they did and died. Even though there is a lot of debate about the tree being a symbolism rather than an actual thing that’s not the point I wanted to make.

If you look at the story deeper, you’ll find that the moment they ate the fruit their eyes were open to see good and evil as promised. They were told they will know death and they did but there was no term in God’s promise about being thrown out of heaven and they were still in heaven even after eating from the forbidden tree. Now is where things get serious, God “knowingly” calls onto Adam and asks him what he did, and what did Adam say? “She made me do it” now is where you find them being thrown out of heaven.

So do you still think they were thrown because they disobeyed and ate from the forbidden fruit? Not likely, because it is clearly written that God told them for their depositions they will die (got their eyes open to good and evil (as promised)) but being thrown out of Heaven was not in the promise. As a matter of fact, they were still in heaven even after eating the forbidden fruit and realizing they were awake. So that leaves the question “Why did they get thrown out?” still open. So this is my answer. Because they didn’t own up to their deeds and instead resorted into blaming one another. Let me elaborate.

As mentioned in the beginning, God made humanity in his own image. So right from the getgo, we can see God wanted us to be like him contradicting the ideology that God was protective of its power. So that makes the tree of knowledge, not a device for measuring their obedience but rather a challenge to exercise there given power. This makes God feel more like the type of creator that wants its masterpieces to grow than an authority figure that’s envious and fearful of its subjects (this is us). God is the MAKER of ALL (let that thought simmer in your mind for a while), We are just pieces of ART. Davinci doesn’t need a reason to justify why he made Monalisa, he did because he can. And also Monalisa will always be a work of art, a mere creation nothing more nothing less. This is who we are, a Monalisa at our best. So now that we clarified the scales of a Maker and an art lets proceed. God made as in his own “image”. What does image mean? Well, I define God’s image as meaning with the will to chose, the power to love and the ability to create. So Adam and Eve were given the God’s character of autonomy meaning the will to chose then we can say it’s assumable to say they were given the right to chose to eat from the tree; meaning there was the probability of them doing so which shouldn’t be shocking. (knowing God’s character of Love).

But there was one thing they did that was not of characteristics of God. When asked why they ate them said something/someone made them do so which completely contradicts God character of autonomy. If we ask God why HE made the world HE would say “Because HE wanted to” and nothing else and there answer should have been the same “Because THEY wanted to” because that is the truth. And this was Adam’s and Eve’s first creation, a lie and a lie in the face of God was the ultimate denial of their godliness. And that is why they were thrown out of Heaven.

Now, this perspective is just a symbolism, a school of thought to teach people how they have the power to chose and also the responsibility to own up to whatever outcome there is. We were given a form, a skill, and a playground. These things are not us but a mere representation of us. To embrace our true self which is godliness and make something godly out of these things is our purpose (identity) here, complaining about what we got or even blaming others for our choices is the ultimate sin.

There are two types of people out there, those who live for a reason (“ለምክንያት“) and those who live on a reason/excuses (“በምክንያት“). You chose which one you want to be.

In Search of Waldo