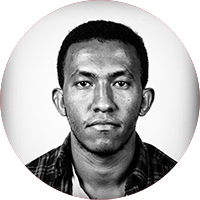 Co-Founder and Ecosystem Lead to the first Game Publisher Collective of the country with the vision of creating a proactive, engaged, and fulfilled society through the application of Game Thinking.
www.efuyegela.com

Co-Founder of an interdisciplinary team from Ethiopia and Germany with the mission of transforming living spaces and ways of life by using the logic of the games.
www.sostlab.com

A Program Coordinator and a Game Thinking/Experience Designer for an African Wide project that aims to bring 15 Countires that will work of 15 Ideas to make 15 Games. www.enterafrica.org

Founder and Team Lead to an international team of architects, engineers, & designers striving to
bring game thinking to/from Africa in the fields of work, education, health and relationships

An umbrella social enterprise for a set of entrepreneurial initiatives having its focus on the creating a culture of sharing to help society help itself. Sharing is the future and we are already their. www.gursha.org

A Game Thinker, a Tech & Innovation Consultant, a Community Builder and a Serial Entrepreneur with an appetite for both Science and Arts; A team player with a quality of deconstructing complex systems. A true believer of life and a brighter future for all…

A Game Thinker, a Tech & Innovation Consultant, a Community Builder and a Serial Entrepreneur with an appetite for both Science and Arts; Dagmawi Bedilu has one vision, that is to Sell Joy in Jars and he believes the ultimate way to do so is by investing on the development of a meaning seeking, service centered and fully engaged youth and youth communities. He describes himself as a deep generalist (the real jack of all trades), who has made it his life purpose to see the creation of these communities. After working as Senior Software Architect for Ethiopia’s biggest Tech Company, Dagemawi has made a 180′ career shift into the world of Games and Engagement which he describes as the highest form of art and the perfect bridge between the humanities and science. He together with his team has co-founded, setup and run various initiatives including Chewata Awaqi (a startup that specializes in gamethingking), the Ethiopian Games Associations, Efuyegela Publishers, EnterAfrica(an Afro-futuristic pan-african ecosystem building initiative by the Goethe Institut across 15 african countries), Chewatacon (the first ever gaming festival of its kind), 100Shama(a community for nurturing the 4C of the 21st century), D5, Positive Thinkers Club, Social Gamenights and PugaumeTalks.

Dagmawi Bedilu, in his Engineering career, has managed to work as a Senior Software Architect for the country’s biggest IT company, designing and developing Location-Based Systems while leading a team of 25+ engineers/developers, supervising more than 15 projects.

In the entrepreneurial arena, he has founded gursha.org, a social enterprise that aims to enable societies to solve their own problems using indigenous knowledge. Also, a co-founder of Chewata Awaqi a cross-cultural, cross-disciplinary company with an overarching vision of curing the world with Game Thinking by bringing back the fun in the Learning, Loving and Living experience; meaning creating social impacts through the use of games, playful design, simulation, gamification and serious games.

He was a speaker at the 2017th and 2019th Gamescom held in Köln, Germany, a speaker at the 2019th A Maze in Berlin and 19th Munich Media Day in Munich and various local and international platforms. a 2017 Creative Futures Ethiopia candidate, Creative Hustle Game Dev. Lead Trainer, 2016 Top 11 of the Ethiopia’s best startups, 2015 Rotary Youth Leadership Award (RYLA) candidate and is a project manager for 2018-19 Enter Africa Project (a Goethe Institute Initiative). He is also a startup mentor in one of the country’s leading incubation center (BlueMoon Ethiopia).

A Rotaractor, a Toastmaster, a 100Shama, a Positive Thinker (PNL Newsletter Chief Editor) and a LifeBlogger. A true believer of life and a brighter future for all

“If my Maker came to me and asked me if I wanted to live a million years I would say
‘Hell No, I want to live a thousand years…. a thousand times;