Do you consider yourself Rich or Poor?

Do you consider yourself Rich or Poor?

If you think you are rich

If you think you are poor

Wealth, financial wealth, has been man’s critical concern since the beginning of time. How to earn it, how to double it, how to keep it, how to spend it… This concept and its distribution has been responsible for most wars amongst nations and even as of right now It is a term representing a paradigm, an ideology. And all these paradigms (capitalism, socialism, communism…) spoke about wealth and its best way of utilization vis-a-vis equity and equality.

Equality of wealth simply means everyone should have a “relatively” equal amount of wealth no matter the contribution. This might work in paradise or a utopia of a nation. The main question raised against this ideology is the need for progress. If everyone is getting the same income then there is no need to do something more, do something better, do something faster… [Reminds me of a Daft Punk song]  Hence hindering evolution. This mentality will kill-off motivation especially in a society where the awareness level is low and competitive. And some might even claim it’s not fair to pay a doctor and a janitor the same wage. So to resolve this issue the term equity is derived.

Equity is by far equality. Equity means not equal but “fair” distribution of wealth. Fair meaning reaping what one sows, getting your worth, those who give more get more and those who give less get less. This sounds like a clear, black and white principle. But there is a lot to it, a lot more than being fairness, much much more. If you think of fairness to be the only character to define equity then it will lead to the current chaos the world is in; The wealthy will rule the world while the poor simply dies [As exaggerated as it seems] or in short

“The Rich will eat the poor to death”

“ONE DAY, the poor will have nothing to eat….except the rich”

So, the poor will not die easily and will turn against the wealthy and before you know it, war. And whether you believe it or not, almost all wars were caused by the belief that wealth isn’t distributed equally. And we might think we are a long way from this but I tell you if you listen carefully there are always the rumors of war. courtesy of Bob Marley which in turn is courtesy of Haile Selassie I

[Poor] citizens of any nation

That until the basic human rights are equally Guaranteed to all [Equity], without regard to race

That until that day The dream of lasting peace, world citizenship Rule of international morality Will remain in but a fleeting illusion To be persued, but never attained

So there is a missing variable, a variable that can support the fairness definition. And there is, but first, it starts with a true understanding of wealth and the source of it all, humanity.

Humanity can be defined by as a self-conscious entity [with the awareness of individual wisdom over global wisdom] and a social animal [with physiological and psychological needs] at the same time, with the basic instinct of Survival (living) and Prosperity (comfort). So this means, if even one of this 7 billion entities is pushed to the point of poverty (threat to survival and comfort) as a survival instinct it will fight and the fight will cost both sides. So it is a must to create not only a cooperative mentality (which can hinder growth by itself) or also competitive mentality (which leads to war by itself) but for a healthy cooperative competitive platform. Where the winner will humbly embrace his victory and the loser gracefully accept his loss. So to do this we need to have a healthy understanding of wealth. For a cooperative-competitive mentality, we should define wealth as follows.

Wealth is a matter. It can neither be created nor destroyed and can only be transformed from one form to another, from one owner to another.

Another perspective is the motive for the rich to be rich and the poor to stay away from it. It makes sense why poor people want to be rich because of their survival instincts but the rich, well the rich want to be richer mostly out of fear. The fear to stay as far away from poverty. A quote from the movie, Wolf of Wall Street…

Let me tell you something. There’s no nobility in poverty. I’ve been a poor man, and I’ve been a rich man. And I choose rich every f**king time.

and all this fear is due to the lack of understanding of wealth. We can put Wealth as a product of two factors united

People might disagree but this is the truth. The percentage might differ because their exists people who work hard but still struggle to survive [Mothers] whereas there are other people who become millionaires just because they hit the jackpot. For now, let’s average both out to a fair 50-50 stake. So this means the rich should know that they might go broke no matter how hard they work because they might run out of luck hence he should stay humble of his fortune and the poor should be hopeful and keep working until one-day lady luck turns her face around. This will create a harmony.

In addition, the rich should share his wealth and invest not only for his own well being but for the well being of the poor not as a gesture of holiness [good Samaritan] but out of humbleness that he might end up there one day. And the poor on the other hand should be hopeful and respect the wealth that was acquired by the rich and continue to participate productively in the accumulation of more wealth in the hope that one day he will join that rank. This is harmony. This is equity.

Equity is the understanding that wealth is half luck half work. So this means it’s half to brag about and the half to feel humble about. So the rich should be happy enough to bask in his success and yet be great-full and generous for the opportunity he’s got while the poor should stay hopeful that one-day lady luck will visit him.

To summarize it in a sentence,

“It is what makes everything and nothing the same.” 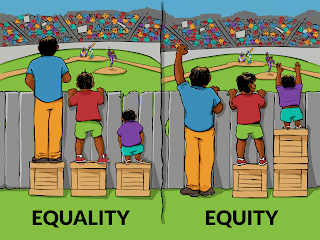